Does my cat find me annoying?

Cats can come across as quite cantankerous creatures at the best of times.

If you were to base your perceptions on facial expressions and demeanour alone, you could be forgiven for thinking that your flinty-faced felines held a perpetual grudge.

Cats tend to appreciate their own company and they’ll break their self-inflicted isolation if and when they’re ready for a little bit of attention and affection.

Imposing yourself on their alone time and invading their personal space — by trying to force moments of TLC upon them — will only frustrate and aggravate those feisty fur balls, and they’ll let you know about it.

But their quirkiness and independence shouldn’t always be misinterpreted as spite or annoyance. Cats are forgiving animals and will generally accept the arm of friendship when offered. 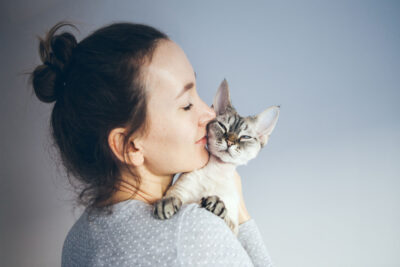 What are the signs your cat finds you annoying (or is mad at you?)

Should I leave my annoyed cat alone?

We all like to have a bit of peace and quiet when we’re feeling annoyed at someone or something.

A little bit of alone time can do wonders for the soul – and can help you get back to feeling your normal self.

Separating yourself from moments that provoke such emotion can help ease the tension and deflate the situation.

It’s no different for our independent pets. Providing them with space, and ignoring their quirkiness, can work out best for all parties.

Trying to force interaction, and invading their personal space, will only ramp up their emotions and could lead to an aggressive response.

Distraction techniques are a method that some pet parents apply to help deflect the tension – with small toys or water guns.

Should you make the decision to approach, ensure that you do it with caution. Make yourself as small as possible, to appear less intimidating, and to let your cat know that you’re not a threat.

Again, they might get all defensive if they’re made to feel like they’re being cornered at any given moment.

I’m worried that my cat hates me – Is this normal?

It’s perfectly normal to feel as though your stern-faced sidekick has got it in for you.

Their behaviour/demeanour/attitude can often leave you with the feeling that you’re unappreciated and unloved.

The chances are, however, your fabulous feline doesn’t dislike you at all and it’s more paranoia on the part of us pet parents.

It’s fair to assume that some will hold a grudge – and some will hold one for longer than others – but it’s highly unlikely that feelings of ‘hate’ enter the equation.

In situations where it feels like you’re constantly burning bridges, rather than building them, it might be wise to try out a few bonding techniques.

This way you can test whether your intuition is accurate or, as is likely to be the case, your cat has been completely misunderstood.

Something happening behind the scenes, completely unrelated to their relationship with their humans, will normally be the trigger for their behaviour.

Finding the source of what’s causing that hostility is key while remedying/addressing that situation in the best way possible will go a long way towards fixing the problem.

Should the issue persist, and the disdain continues to be aimed exclusively at you, then it might just be an individual trait that is bothering them.

It could be something as small and as insignificant as a scent that you wear, behaving in a manner that scares them (which can be completely unattended) or it could be that they don’t approve of your culinary offerings.

Being more playful towards them and increasing the time spent with them will often lead to a change in temperament and get your relationship back on track.

Should I seek veterinary support if my cat doesn’t respond to me?

Your cat’s behaviour – especially if it’s out of the blue and completely out of character – could be a sign that they’re suffering from an underlying condition/ailment.

If they stop responding when called, start avoiding interaction, refuse affection/petting/cuddling, stop eating, hide away, destroy furniture or household belongings and hiss or bite when approached, then veterinary advice should be sought.

If anything sinister is going on in terms of their health and well-being then the root of this needs to be identified and remedied as soon as possible before the condition worsens.

Patience is a virtue

Always be sure to treat your four-legged family member with kindness, love, affection and patience, no matter how they behave towards you.

Their actions are normally a sign of anxiety – or illness in extreme cases – rather than a show of disobedience or hatred.

They may have taken offence to a certain situation, a change in their environment or disruption in their daily schedule/diet.

Our crazy cats could be acting out because they’re desperate for more exercise/playtime, they could be reacting to boredom or they could have sustained an injury.

There are a catalogue of reasons for why our pets behave in a particular way, but vets are able to provide guidance and/or training methods to help change and curtail unwanted behaviours.