At what age are kittens safe from tomcats?

Tomcats are notoriously territorial and occasionally troublesome — even in the company of their own offspring.

The malicious behaviour of some hot-headed male cats is the complete antithesis of female felines, who project naturally protective and maternal instincts.

This aggression is deep-rooted in the character of male cats and was drilled into them during their primitive years in their fight for dominance and survival.

Kittens up to the age of four weeks are susceptible to these violent episodes because they’re underdeveloped, immobile and defenceless, and no match for their far more forceful elders.

They become gradually more independent as they reach eight weeks old, when their sense of sight and sound develops, and they start to move around a little more.

This could be a convenient time to introduce them to other cats, though any ‘play dates’ should be carefully supervised by pet parents. Cats aged between two months and four months old, and beyond, should then be fully ready to be integrated into the animal kingdom.

Are male cats dangerous for kittens to be around?

It would be stereotypical and slightly discriminatory to pigeonhole all tomcats as ‘dangerous’ – but pet parents should always tread with caution.

Domestic male cats, and their rivals in the wild, won’t ever be winning any ‘Parent of the Year’ awards, because they don’t tend to get involved in raising their own kittens.

Their territorial tendencies – ingrained in their DNA from their hunter-gatherer ancestry – where tomcats would tend to target other litters in their bid for dominance while attempting to sire as many heirs to their empire as possible – means they can still pose a threat.

That instinct of building their own portfolio – and extending their own genetic footprint – is still built into some, but it’s important to stress that not all male cats have an appetite for preying on kittens.

While it probably isn’t sensible to take a gamble and expose delicate kitty-cats to fiery senior felines until they’re ready, it is a situation you can slowly but surely introduce them to, under proper supervision, once their senses develop and they’ve gained some considerable size. 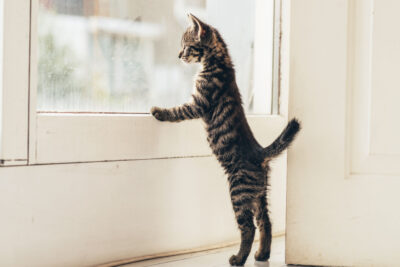 What can I do to keep my kitten safe?

It goes without saying that parents would do anything to protect their babies from the threats in the outside world — as well as cushioning them from any dangers lurking on the inside.

So why should it be any different for our precious pets? Going to similar lengths to provide a risk-free environment for your pets, particularly at a delicate age, should be high up the list of things to do.

Setting your fragile felines up in secure and safe surroundings – and completely restricting their exposure to potential perils – will ensure that they’re given the best start in life and that can go a long way to aiding their development into adulthood.

Under no circumstances should your kittens be given the licence to roam around in the fresh outdoors until they’re absolutely primed and ready to be introduced into society.

This is one way of denying conniving and troublesome tomcats in the wild from gaining access to your cute and cuddly kitties. That won’t protect them if you have a male cat in your household, but there are a number of deterrents to keep them at arm’s length.

Using water sprays inside the house, or strategically installing sprinklers in your garden or the surrounding areas around your home, will ensure that those territorial tail-waggers won’t get in the vicinity of your precious pets. Cats hate getting wet, so this is a surefire way to keep them at bay.

Things can become a little bit more testing when those nighttime ninjas are out on the prowl. This is when pet parents might have to get a bit more creative and think outside the box, literally.

Makes surfaces awkward and unpleasant – using crushed rocks, river rocks, or pinecones as borders – in order to make the cat hesitant when approaching. You can even use visual types of deterrents, with reflective surfaces such as mirrors or CDs, to scare the troublemaker into submission.

Fragrances are another option. Different perfumes and potions, with potent pongs, don’t mix well with our cats, who have a sensitive sense of smell.

Leave those scents in any areas where you think the threat lies and make use of citrus peels, garlic, coffee grinds, lavender and any other peculiar aromas that are unpleasant for cats.

Finally, green-fingered kitten companions can dot plants around their household. Lemon thyme, pyrethrum, marigolds, lavender, and other herb plants are among the plants that cats don’t appreciate the aroma or texture of.

Improvisation can be key in these situations!

Never take your eye off the ball

Tomcats are highly competitive and territorial by nature.

Male cats aren’t necessarily natural-born killers, but their predatory instincts can cause issues.

Some decide to get involved in parenting, and act protectively towards their litter, but this appears to be somewhat of a rarity.

The safety, happiness and wellbeing of your kittens is of paramount importance, and it’s important to protect them at all costs.

Err on the side of caution, even if you have a tight bond with your indoor tomcat. Things can turn nasty, regardless of whether the situation is being carefully monitored.

Allow your kittens to grow in a secure environment and avoid the outdoors as this will place them in unnecessary jeopardy.

Once they’re of age, they develop a sense of sight and sound, they’re mobile, and have grown to a size where they are able to defend themselves, then it’s time to introduce them to the world.