Is my cat protective of me?

Our caring and kind-hearted kitty-cats don’t often get the credit they deserve.

Stereotypically renowned for being aloof and unsociable, it’s a myth that our four-legged fur-balls have been unable to dispel.

Dogs generally get all the recognition, described as “man’s best friend”, and lauded for their unwavering loyalty and devotion.

But their friendly feline counterparts can be just as loving, affectionate and protective towards their human counterparts.

We’ve all seen viral videos of cats springing to the rescue of their pet parents or standing guard as they go about their daily duties.

It’s often a side to cats that goes unnoticed and underappreciated, it’s a relationship that is largely seen as unrequited and one-sided.

This just isn’t the case, however. Our cats are adored, and the feeling is mutual!

You’ll notice that they pay incredibly close attention to where you are and what you’re doing. They won’t let you out of their sight.

Their predatory instincts are ingrained in their DNA, they’re territorial by nature, and they’ll do all they can to defend themselves, their property and those around them. It’s just what they do! 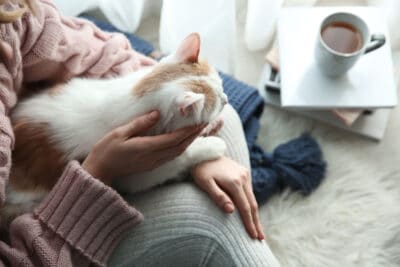 What are the signs of a cat being overprotective?

Should you worry if your cat is being overprotective? How can you make your cat less protective?

It is extremely reassuring to know that your four-legged companion has got your back.

For a pet that can so often be perceived as distant and selfish, it’s nice to see that they care.

Every pet parent would like to see their tail-wagging housemate jump to their rescue whenever necessary.

But there can come a time when our caring and courageous cats can overstep the mark when in the line of duty.

And it’s imperative for us to recognise when our felines’ protective force-field is perhaps a little bit too much.

It’s only natural for your best mate to jump to your defense when faced with a live threat.

They’ll react to sinister smells, sounds and/or sights, and respond to strange or unsettling situations in and around the household.

It could be the threat of an intruder, an unfamiliar animal that has made a beeline for a vulnerable family member, or any other kind of scary/uncomfortable scenario.

They’re well within their right to behave like the ‘hero of the hour’ in extreme cases, after all it is in their DNA to be territorial.

However, what happens when your feisty felines become aggressive or overly protective in moments that aren’t particularly troublesome or threatening?

They might not be able to read the room when a new baby, a new pet, a new flatmate, or other friends/relatives are introduced to the household.

If your cat’s aggression/protection proves to be unrelenting and continues to be directed inappropriately, then it’s time to seek professional help.

A pet behaviorist or a vet might be able to help your cat vent their anger and displeasure properly and in the right moments.

Be on the lookout for red flags

A cat’s overprotective mannerisms shouldn’t be celebrated or encouraged.

Acting defensively and territorially is ingrained in their genetics, it’s deep-rooted, and a product of their ancestry.

When that behavior, however, becomes problematic, overbearing and inappropriate, that’s when things are a bit more complicated.

If your ‘hissing’ housemate continually takes things too far, seek immediate help so their temperament can be addressed before it gets out of hand.

Keep tabs on your kitty-cat’s mood, spot the red flags, and respond immediately, or somebody/something could be seriously harmed.