Can you teach your cat to come when called?

Doing anything over and over again can feel like a chore.

But repetition is the key to consistency and conviction – particularly when it comes to our cats.

Felines aren’t as obedient as dogs, they’re not as capable at picking up commands, but they’ll get there with a little patience and perseverance.

Our often aloof animals aren’t hard of hearing, far from it. They’re just more likely to pay attention to your instructions if they’re delivered in a higher-pitched voice.

Once you’ve grabbed their gaze, it’s time to get to work. Start small, simplify the training process as best as you can, then begin to broaden your horizons and attempt something a little more inventive.

Try kicking things off in close proximity, adding the incentive of a kitty treat, which will reward their compliance and encourage them to get into a routine.

Then, when they’ve mastered the art, try making the commands more spontaneous while slowly weaning them off their tidbits. Eventually, if they’ve taken everything on board, they’ll associate a human’s call with the need to respond.

It is, without question, easier said than done, but stick with it and pray that your four-legged friends begin to play ball.

How to teach your cat to come to you when called 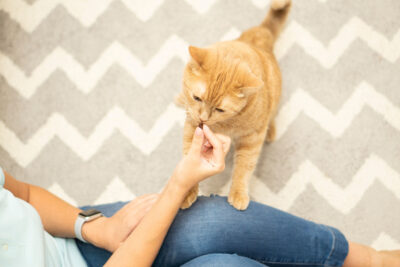 How do you know if training is working?

Training methods might not work for all cats – but this isn’t anything out of the ordinary.

Many educational processes or teachings can be hard to comprehend for many domestic animals or, even, humans.

If a task is too complicated to fathom, then instructions can simply go in one ear and out of the other.

You will, eventually, reach a point when you know whether it’s a ‘no go’ or whether your prized pet is ready for ‘The Supreme Cat Show’.

Cats that are stubborn, unresponsive and dismissive of your approach for extensive periods will likely stay disinterested, therefore you’re probably wasting your time.

Those that want to learn, and have a willingness to cooperate, will usually engage in some way, shape or form early on.

It doesn’t matter how big or small the response is at first, just stick at it, work with it and keep your fingers crossed that they get the gist.

Patience is a virtue

Most animals respond to certain situations based on previous experiences or encounters – whether good, bad or indifferent.

If a behavior evokes negative connotations, based on punishment or negative feedback, then they’ll be more reluctant to repeat that specific act in the future.

Therefore, establishing a positive connection/reinforcement for good behavior will encourage an idealistic response, which is beneficial when attempting to coerce your cat into acting a certain way.

Be consistent, persistent and patient and hopefully your efforts will reap their rewards. Cats aren’t generally considered as sociable, faithful and compliant as dogs, so try to avoid making comparisons between the two training styles and their effectiveness; it’s like comparing apples and pears.