Why do cats groom each other?

Cats are the kings — or queens — of the castle when it comes to good grooming etiquette. Our pristine little pets have perfected the art of pampering, which is why they’re always able to keep themselves looking prim and proper.

But our compulsive clean-freaks won’t only take pride in their own appearance, they’ll often lend a paw, or a tongue, to ensure their cat companions are also looking spick and span.

Mutual grooming between feline friends — or allogrooming — usually occurs among kitties that have built a social bond. These sweet displays of affection signify a connection between one or more cats, but they also serve a practical purpose in helping their buddies target those hard-to-clean areas. 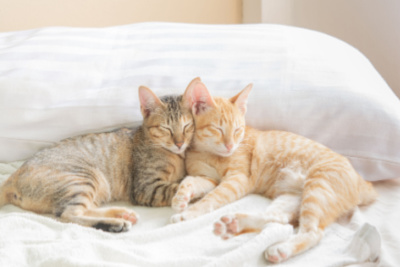 What are the main reasons for cats grooming each other?

At what point could grooming be considered excessive?

The cleansing process between cats can sometimes descend into playfulness or — in extreme cases — chaos!

If moments of bonding reach boiling point, then it’s likely that a member of the pamper party has thrown a temper tantrum for one reason or another.

An invasion of personal space is still a thing for our felines, so too much attention can turn their temperament at the flick of a switch.

Should they lose patience at any moment, enjoyment and contentment quickly turns to annoyance and agitation, which will lead to one of the kitties lashing out.

This can also be the case if a cat accidentally makes contact with a flesh wound or infection, which would presumably incite a reaction from their buddy.

But when does grooming, in itself, become too much? Well, considering our felines like to feel fresh, and spend up to half their day grooming, it can be hard to tell when they’re over-doing it.

It should, however, become apparent when their routine appears more desperate than necessary, and if licking, pawing or biting turns excessive or incessant.

Obsessive tendencies, and irritable behaviour, is an indication that your plagued pet is suffering from an injury, illness or ailment and is in need of veterinary attention.

It could be any kind of underlying medical condition; a neurological disorder, skin irritation caused by fleas, parasites or infections, or it could simply be down to stress in the presence of conflict.

Ignoring their distress, and allowing any issues to worsen, can become problematic as it will likely lead to psychogenic alopecia, a self-inflicted injury that causes hair loss, balding and/or infection.

Is it okay to let my cat groom me?

It is perfectly normal and natural for our well-washed cats to lightly bathe their pet parents. Licking is as much a term of endearment, and a show of affection, as it is a grooming mechanism. Our felines learn this behaviour from birth, stemming from kittenhood when groomed by their mothers, and they carry this sentiment into their adult lives. As well as creating a social bond, they might also be imprinting the same territorial markings that were bestowed upon them by their mothers, to illustrate possession. Cats may also show their humans attention to initiate playtime or to illustrate a spectrum of emotion — whether it’s a sign of comfort, relaxation and content or anxiety, stress and uncertainty.

Grooming is as important to a cat’s life cycle as eating, sleeping and staying hydrated. Their daily schedule is filled with windows for washing, whether it be for themselves, a house-mate, family member or a pet parent. The tongue is one of your feline’s greatest tools, they’re fastidious when it comes to general cleanliness, and they’re taught to purr-fect its use from birth. Try to err on the side of caution, however, if their tendencies change in any respect. If they have an injury, or skin issue, their grooming ritual might become more repetitive or obsessive which, in turn, could lead to infection. Contact a vet if you have any concerns over their behaviour.