Can my cat eat catnip (and is it bad for cats)?

Most kitties go crazy for catnip. And who can blame them? Its stimulating qualities can make your feline feel like they’re on top of the world!

The leafy green member of the mint family — also known as Nepeta cataria — carries an essential oil called Nepetalactone, which has the power to turn the most passive pets into fired-up little fur balls. The ritual normally opens with the inhalation of the perennial herb before our four-legged friends begin to rub their heads and faces on it. They might then roll, flip, jump, play, stretch, scratch, dash and vocalise while under the influence. There is no reason to deprive your cat of catnip, it’s a positively non-toxic treat, though, like anything else, it should be enjoyed in moderation. Sickness and diarrhoea are just a couple of the ailments that they could suffer from if they overindulge.

Why do cats love catnip?

The smallest sprinkling of catnip can evoke an immediate change in your kitty-cat’s typically calm and controlled demeanour.
Like a moth to a flame, cats go wild for this plant’s allure. They simply can’t get enough of it. A quick whiff of the stuff and they’re away, going haywire and propelled to a state of hyperactivity for a spell of 10-20 minutes until the effects wear off.
But just why do cats seem to love catnip so much? Well, let us try to break this down into digestible chunks. Nepetalactone, a natural mood enhancer, enters your cat’s scent organ – the vomeronasal gland – after the the organic compound is released.
This happens when microscopic bulbs on the plant are tampered with – by crushing, chewing or rubbing – and, when inhaled, the scent travels to the gland located in the roof of the mouth before making its journey to the brain and triggering ‘happy’ receptors. This is when delirium kicks in, and your precious pet’s ulterior ego makes a brief appearance.
It has even been suggested that our crazy cats behave in this manner because catnip serves as an aphrodisiac for animals.
They can display a wide spectrum of emotion, from happiness and excitability to aggression, as the scent imitates feline sexual pheromones. But there’s no need to get bogged down in the complicated ‘how’ or ‘why’, just feel safe in the knowledge that your fantastic little fur baby is in its happy place. 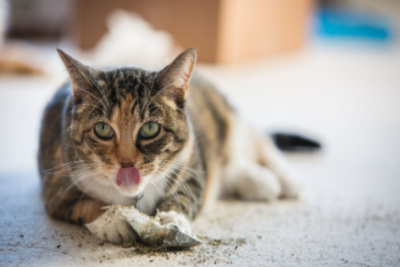 I give my cat catnip regularly – Is this okay?

It is possible to have too much of a good thing. Just because something feels exciting, enjoyable and entertaining, it doesn’t mean it’ll evoke the same sensation if experienced excessively. And that’s definitely the case with catnip.
Not because there’s a risk of overdosing, or addiction, as cats are an efficient and disciplined species, but because prolonged use will have an adverse effect and decrease its cogency. Catnip is best served in small doses, and less often, to present itself as a special treat, rather than a snack they become accustomed to or expectant of.
Avoid prescribing in quick succession, too, as it could take between half-an-hour to two hours for your kitty to become susceptible to the effects again once ‘immunity’ wears off. Consuming large amounts can also lead to health issues in some instances with cats suffering from sickness, diarrhoea and/or dizziness if over-exposed. Contact your veterinarian if you wish to discuss appropriate amounts of catnip for your pet or if your cat shows any signs of the aforementioned symptoms.

Is catnip okay for kittens?

Underaged experimentation won’t necessarily do our whiskered companions any harm, but it would be a pretty pointless exercise. Young kittens don’t tend to respond to catnip until they are six to eight months old once their vomeronasal organ is fully developed. Others might respond as early as six to eight weeks of age, though this isn’t too common as our fur babies will not have yet developed their sensitivity to nepetalactone. Kittens certainly don’t need any extra encouragement when it comes to being spirited, sprightly, playful and positively full of beans! It’s already in their nature.

Don’t be concerned if catnip has no effect

Catnip is used in many different ways by pet parents.
It can simply be introduced as a treat, laid out as a reward for good behaviour, or to encourage your cat to become more active, or even be utilised to help ease anxiety. Catnip is largely renowned for sparking a wild reaction from our fiery four-legged friends, but this isn’t always the case. Don’t be concerned if your precious pet doesn’t respond in a stereotypical manner. Some cats can develop an intolerance to the herb’s effects, become desensitised, while researchers estimate that approximately 30% may not experience a reaction throughout their entire lives due to a genetically inherited imbalance.
Some cats, even when under the influence, might also react differently, descending into a more mellowed, hypnotic, more trance-like state, which is also perfectly normal. Seek the guidance of a vet if you have any queries or questions regarding your cat’s reaction to catnip.